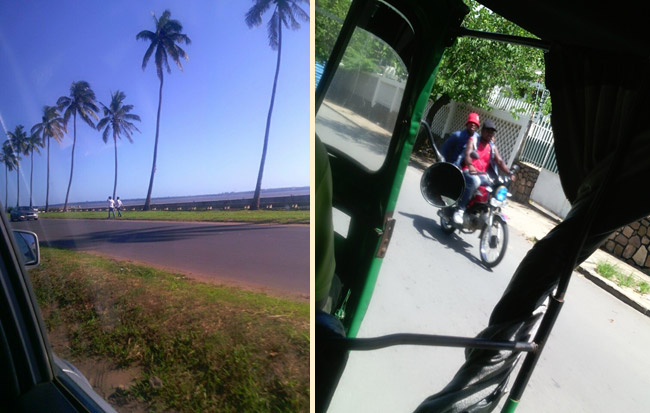 Foreign languages and a suitcase of memories: Why we all need to travel at least once in our lifetime.

“não falo português” I managed to scramble out. The cashier standing in front of me looked mighty confused. Maybe I was saying it wrong, so I tried again; this time with a deeper pronunciation of each word. “não falo português” Slowing letting the words crawl out of my lips and into the musty air. Here I was, 38 Mozambican degrees out, painfully holding up a cue in a convenient store, struggling to piece together a simple sentence. I don’t speak Portuguese, is all I was trying to say and all I wanted was for someone to understand me. I’d been in Mozambique for close to a week now and this was my first solo trip out in the city. My first solo trip and I was failing at it dismally. My cousin, who was now an honorary Mozambican and a quite fluent in the language, had given me a few meticais and pushed me out of her UN office door. “Go explore” She had said and man the thought of all that freedom in one of the most colourful places on the continent had felt so exciting. And it was. I’d spent hours hopping from one street to the next. Pulling out my camera for a selfie or two every now and then and occasionally greeting a smiling local. Flavia, her housekeeper had spent the better part of the first two days of my visit teaching me basics of the language to help me navigate the city. But now, here I was in a convenient store struggling to structure a conversation longer than a touristic disclaimer. “falo inglês?” a question behind me was posed, which caught me so off guard, I spun around in a whiplash inducing manner to face the voice that had sounded like what hope should feel like should it ever be personified. He was a short, stubby man, holding on tightly to the soda he had retrieved from one of the refrigerators. I felt a sigh escape my chest and all reason leave my body. “Yes!” I exasperatedly said. “And I really need to make a phone call!” Sending him into a large Cheshire cat grin just before sarcastically asking “How on earth have you survived Maputo?” And that was a very good question.

It’s a miracle I’d even found a gas station. I had wandered about in a very cool calm and collected panic (Or so I’d like to believe) for what felt like hours. Half power walking through crowded streets that soon started to appear to be the same the longer I trudged. Did I mention the heat? I had carefully chosen my outfit per advisement of my weather app, and true to its divinity; the app had been right. My water bottle now held contents that were as warm as the Indian Ocean that licked the beach and on my forehead beads of sweat rolled carelessly down my face, tucking themselves gently behind my ears. Cars speeding past, taxis, shaapaa, people moving about. And I, caught in the middle of it. I was ready to find a bench and collapse into in defeat; I had already accepted the probability of a lemony snickets rewrite where I ended up lost forever and had to live off the streets of Avenida da Marginal, bagging coins from singing diaspora songs. I was done. But as I turned the corner, a red sign with petrol silos came into view. Could it be? You bet it was! I don’t think I’ve ever been that excited over gas.

My trip to Mozambique had been impulsive and spontaneous. A drive home after a family event had been the domino that had set everything in motion. “So graduate, what’s your plan for this year?” My cousin had asked. Not once taking her eyes off the road as she pried me open. It was New Year’s Day; gran’s birthday too. This was one of those family drives where we were all squashed into the car, just trying to get home after a long day of festivities. Also, I was sleepy, and not really up for any more conversation pertaining to how unemployed I was. I shifted in my seat. Uncomfortable. “I don’t know. Go back to school. Find a job. Anything” I really had no plan. I looked out the window, my cousin silent for a moment; her eyes still glued to the road. Honestly, what was my plan? Finally, she looked up at the mirror, her eyes warmly locking into mine. Then with a light bulb moment smile, she said “We go back to Maputo this weekend. Ask your mother if you can come along”. She didn’t have to ask me twice. 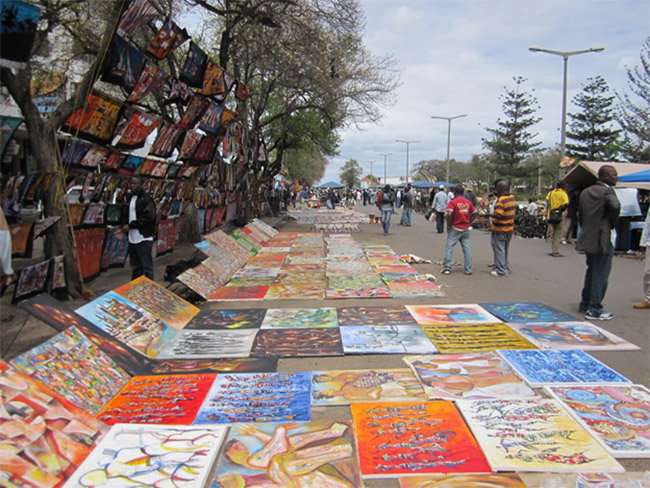 The man behind me is still chuckling at my dilemma. His English is good. Patchy, but good. I ask to use his phone and after a two-minute dialogue of my cousin half laughing and half admitting to the relief of not having to explain to our mother’s how she lost a whole 23-year-old, I hang up, place the phone back into the kind strangers’ hand; piecing together an Obrigada, just before pushing through the glass swinging doors and stepping back into the Maputo heat. The man had pointed me in the direction of Tshopelas, the small little exotic demi-scooters that zoomed through streets every couple of seconds. I had been itching to jump on one since the first day I arrived in the city, but now as I sat clutching to the bar behind the driver’s seat, shifting in lateral motion as he whizzed through traffic, swimming through busy avenues, I started to question my life choices. We passed the pastry store my niece had excitedly dared me to try out, down the Avenida da Zimbabwe which I would soon dub United Nations Ville, through the maze of vehicles and out into the most beautiful stretch of road overlooking the ocean. Other Tshopelas sped by, the drivers acknowledging each other with a honk of the horn. Past the fish market and finally halting at my destination. I’ve never told anyone this, but long after my urban chauffeur had disappeared from view, I stood on the street corner and watched the locals go about their day. Chatter. Music from a distant stereo. Children cycling. Girls in scanty clothes walking past. Silly boys whistling. Waves crashing onto the shore then ebbing out again. Laughter. Traffic. Lots of traffic. I stood there and I took it all in. That night I stayed up writing poetry about how vibrant the city was. I was like a running tap. I couldn’t be capped. I woke up the next day and set up my blog. Mozambique had started a chain reaction and this was the revolution that WOULD be televised. Or better yet, digitized. 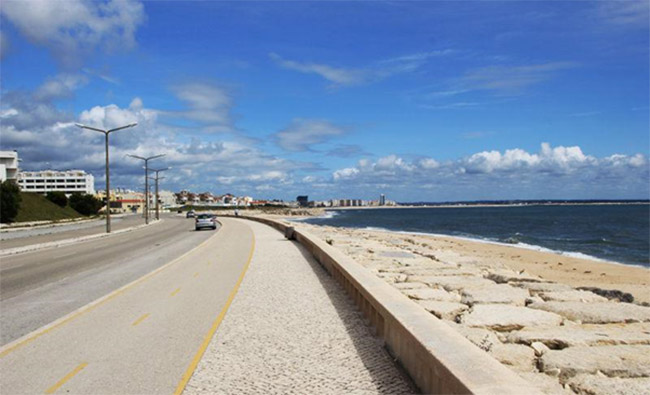 When I finally returned home, three weeks and a blog full of posts later, it was clear that something about me had been changed. Altered. Inspired. Standing in the customs queue, waiting to get my documents stamped, I listened to the conversations being exchanged in various languages. Mostly Portuguese. A little French too. Tourists like I had been, perhaps. When I at last got to the Swazi side of the border, a customs officer reached out for my passport, opened it like it was a Pandora’s box of some sort and upon seeing its contents slowly beamed. “Sobuyile Temnotfo”, He said. Which meant, you have returned. I hadn’t spoken siSwati in all three weeks and now hearing it again for the first time in forever, I couldn’t help but feel a wave of nostalgia swirl over me. I had returned. Home. But I hadn’t returned the same that was for sure. I was different now. I had gone to the other side and come back. I had seen and lived through cultures completely removed from mine. I internally grimaced at how I had embarrassingly refused a beijos when my cousin’s colleague tried to greet me. A whole beijos. A Mozambican greeting. Shame on me. That’s the thing about travel you see; it’s a whole experience. Its school. It’s education on the road and your only tuition is Carpe diem. I’ve heard that those who never travel are no different to those who hold a book in their hands but only read a single page. Sad, right? I had returned with pieces and traces of the places I had been. My mind had been opened and I now saw the world in a light much clearer than the dim one that had been before I packed my bags and crossed countries. I smiled back at the officer and told him that it was good to be back. In vernacular if I might add. In beautiful SiSwati vernacular. Then reached for my passport and walked back out the door. Stepping back into that Eswatini sunshine. 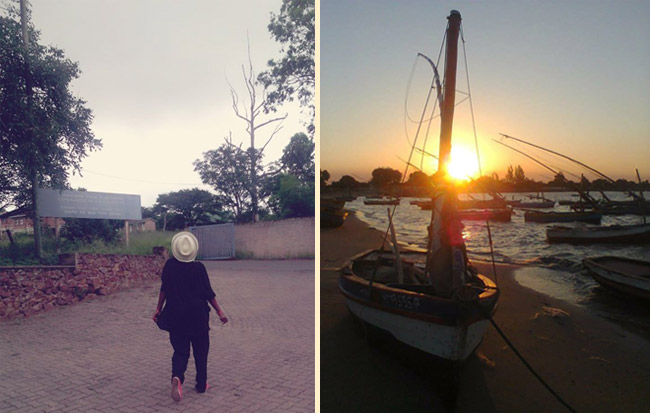 There’s a lot I could say about travel and why it’s so important to answer the call should the road ever beckon to you. I could tell you about how wanderlust is a form of freedom. A learning. I could tell you about the memories that are priceless and the lifetime number of stories you collect when you’re living out these memories. I could show you the photographs of me, the Swazi girl in a foreign urban jungle, eating Maputo inside out and writing from one café to the next. I could tell you of the people I met and the intersections that lingered in my very being the same way the water subconsciously lingers in your mind when you’ve been out too long at sea. I could tell you all that, but where would be the fun in it be? Wouldn’t it be better if you found your own adventures; created your stories. Savoured places, chewing them out from the seams. So Instead, I will sit here, blog after blog, telling you the tales of a girl who was wild enough to take caution to the wind and impulsively live. A girl with a hunger for the world and all the adventure in it. There’s only so much that books can tell you; everything after that then colours outside of the lines, typing past chapters. After that, all there is, is the road, waiting for you. Waiting for a heart that’s just as wild as mine to want more than what they’ve always known. If that’s you, then you’re my tribe. My kind of people. The dreamers. Doers. Seekers. Fulfillers. You’re my tribe. The ones who’ll stand in foreign gas stations, asking for help while failing dismally at sewing together a functional sentence. “falo inglês?” The man had asked. Finding humour in my debacle then asking me how I had survived so long in his country with such little knowledge of their language. I had giggled. Briefly. Then told him that I really didn’t know. Because to be honest, I really didn’t. And what he said to me just before handing me his phone, has stayed with me long after the sand and salt washed out of my hair. “Learn it, senhora. Learn it”.

If that isn’t the most perfect summation for travel, and why we all need to pursue it at least once in our lifetime, then I don’t know what is. 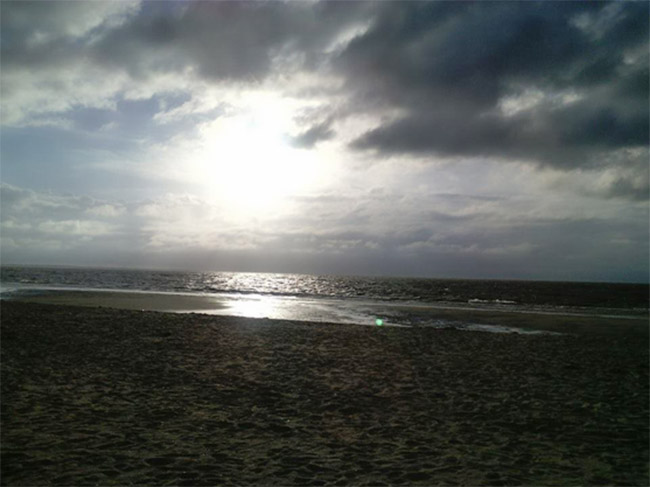